St. Patrick’s Day has evolved from a day for Irish-Americans to celebrate their heritage to a day for all Americans to revel. But the hard partying associated with the holiday comes with consequences — namely more drunk drivers on the road. Every year, law enforcement agencies across the country set up drunk driving checkpoints to catch people driving under the influence during St. Patrick’s Day weekend.

Driving drunk is dangerous for drivers and for others on the road. For those who face DUI convictions, drunken driving can be a huge financial burden. In addition to a fine, potential jail time and loss of income, those convicted of DUI face other costs such as lawyer’s fees and alcohol education classes.

While fines and fees are one-time payments, DUI convictions also come with a recurring financial penalty: increased car insurance premiums. On average, drivers face an increase of $857.53 a year for car insurance after a DUI conviction, and the premium increases can last for years.

NerdWallet analyzed two groups of St. Patrick’s Day events: First, the graphic below focuses on the nation’s top parades, according to the International Business Times. In these cities, the parties start early and so does the drinking. When the festivities come to an end, and if you’ve had a few green beers, this graphic shows how the long-term costs of a DUI will spoil many future celebrations. 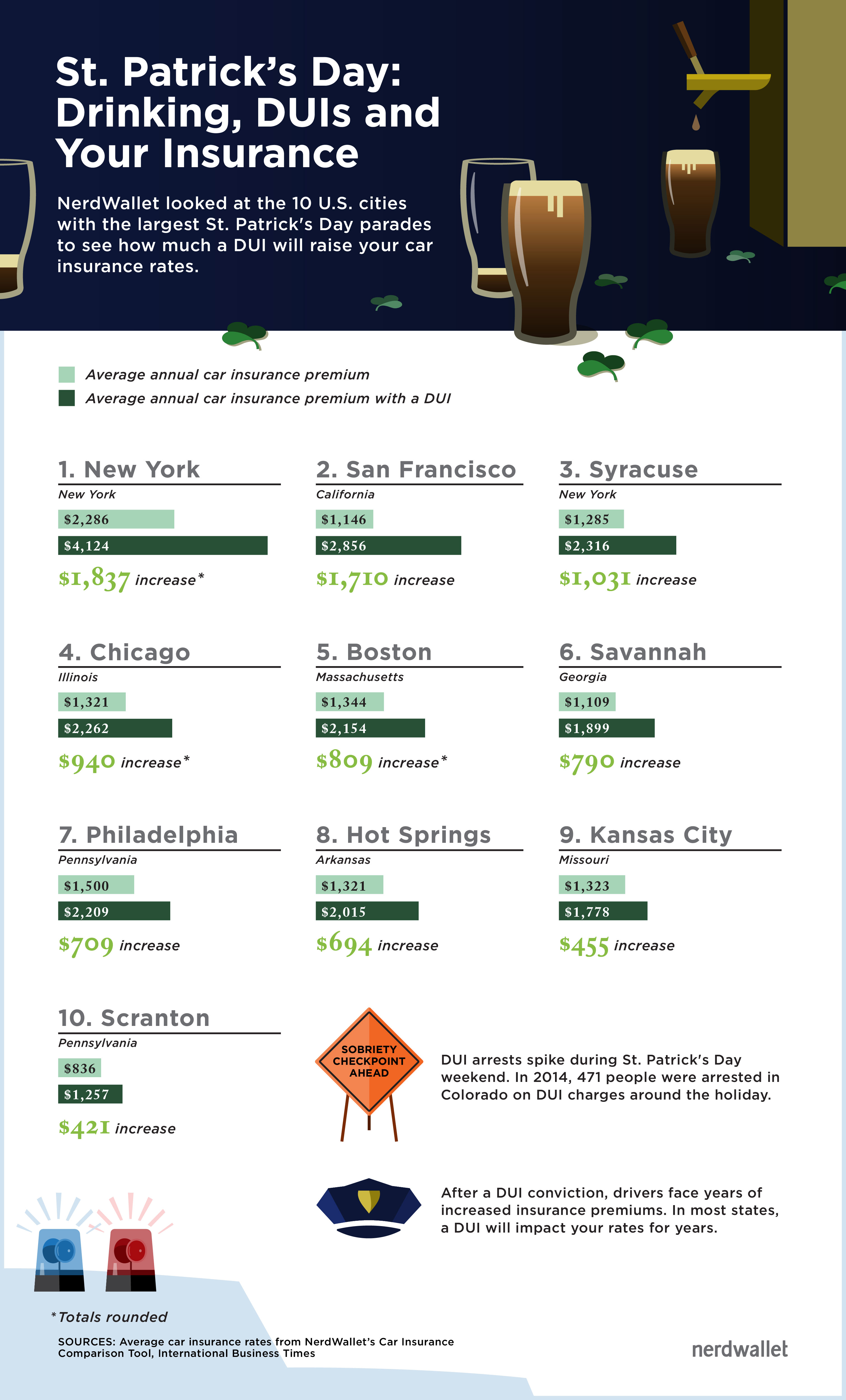 Next, we took a look at the nation’s 20 cities known for their parades and other celebrations around March 17, and ranked them by annual premium increase after a DUI.

Keeping in mind that premium increases can vary drastically from place to place, our list illustrates where drivers face much higher car insurance increases after a DUI conviction.

The bottom line: Before the parade or party, plan your journey home — either with a designated driver or another option, such as the special ride services we found in some cities.

New York City’s St. Patrick’s Day parade, the world’s largest, is an all-day event that starts on 44th Street at 11 a.m. and ends at 79th Street about 5 p.m. State officials have announced plans for additional police patrols and sobriety checkpoints on the holiday and the days leading up to March 17. In 2013, New York State Police made 204 arrests for DWIs and issued 9,763 tickets over the holiday weekend. Drivers convicted of driving while intoxicated in New York face a fine of $500 to $1,000, a year of jail time and a mandatory license suspension of six months.

Each year, law enforcement agencies throughout the Washington, D.C., area set up checkpoints and patrol the streets to stop drunk drivers. Local nonprofit groups also do their part to prevent driving under the influence. This year, the Washington Regional Alcohol Program has a program called SoberRide, which allows people to get free taxi rides home on St. Patrick’s Day.

Compared with New York City’s parade, which has been around for over 250 years, the St. Patrick’s Day parade in Syracuse has a much shorter history: it started in 1982. Drivers in both cities, however, face a potential 80% increase in car insurance if they are convicted of a DUI.

Atlanta’s St. Patrick’s Day parade is the city’s longest-running event, dating to 1858. Law enforcement officials know the holiday is a big one for drivers under the influence. Georgia drivers who violate the state’s impaired driving laws for the first time can expect numerous penalties including fines up to $1,000 and up to a year in jail.

Revelers who are unable to drive home can use SafeRide America, a service that drives people and their cars home.

Illinois’ Department of Motor Vehicles estimates the average cost of a DUI conviction at $16,580, including a mandatory three years of costly, high-risk insurance. Revelers without a designated driver can hire one on an hourly basis through Be My DD to drive them and their cars home.

St. Patrick’s Day weekend is a busy time for Colorado’s law enforcement agencies. In 2014, authorities arrested 471 people on suspicion of impaired driving over the holiday weekend. The two agencies with the most arrests were the Colorado State Patrol and the Denver Police Department, with 96 and 45 arrests, respectively.

In Denver, drivers convicted of DUIs for the first time can expect up to a year in jail, $1,000 in fines, a nine-month license suspension and at least 48 hours of community service.

Some say that Boston’s St. Patrick’s Day parade is tamer than it once was. Even so, it’s still a day for revelry, and those who drink and drive will face stiff penalties. In Massachusetts, DUI convictions result in $500 to $5,000 in fines, 30 days in jail and a license suspension of a year.

The Urbana-Champaign region is unusual in that it celebrated a week early with Unofficial St. Patrick’s Day on March 6. The event draws college students from across the Midwest, and the Champaign Police Department beefs up patrols — last year over 100 officers policed the event — for what it sees as the biggest drinking holiday of the year.

Urbana-Champaign residents convicted of DUI face serious financial fallout. In addition to fines and other fees, the average driver convicted of a DUI will see his or her car insurance premium jump 76.5%.

For those unable to safely drive home, the Champaign-Urbana Mass Transit Districtprovides rides to anywhere in its service area.

In Pennsylvania, as in many states, the fine for a DUI often is dwarfed by the jump in car insurance premiums. A first-time offender with a blood alcohol level of less than 0.10% faces a $300 fine, six months of probation, but no license suspension. A driver convicted of a DUI in Philadelphia can expect a 47% increase, or nearly $709 more, in annual car insurance premiums.

Last year, the Dallas Police Department conducted a “No-Refusal” DUI initiative during St. Patrick’s Day weekend. Under the initiative, judges provided search warrants for blood samples from anyone arrested on DUI charges that refused to voluntarily provide a breath or blood sample. Drivers in Dallas who are convicted of a DUI face stiff car insurance increases, about 61% on average. The fine depends on each driver’s situation and where the driver was arrested.

Drivers who want to celebrate St. Patrick’s Day and not worry about driving home can try My Private Drivers, which provides designated drivers for hire.

Hot Springs, Arkansas, has what organizers bill as the world’s shortest St. Patrick’s Day parade, on the 98-foot-long Bridge Street. About 30,000 people are expected to attend. If any spectators are convicted of a DUI after leaving the parade, they can expect a 52.5% increase in their car insurance premiums along with other penalties.

Last year, in Galveston County, which is south of Houston, police made 11 DUI arrestsduring St. Patrick’s Day weekend. Drivers who receive DUIs in Houston can expect to see a 61% increase in their car insurance premiums. The average driver will pay an extra $690.80 each year for car insurance after receiving a DUI in Houston.

St. Patrick’s Day is a big deal in St. Louis. The parade is the most-attended event in downtown, planners expect over 5,000 marchers and more than 250,000 spectators. The holiday is also a busy day for law enforcement: Since 2010, St. Patrick’s Day has outranked even New Year’s in the number of DUI arrests statewide, according to the St. Louis Post Dispatch. Drivers convicted of a first-time DUI face a 90-day license suspension, while drivers convicted of a third alcohol-related traffic violation would lose their license for 10 years.

In Kansas City, law enforcement officials often set up DUI checkpoints on St. Patrick’s Day. In 2013, police set up a DUI checkpoint that resulted in 27 arrests, which was less than the 31 arrests in the previous year. After a DUI conviction, Kansas City drivers can expect car insurance rates to increase 34%.

In 2013, law enforcement agencies in the three counties across the metro regionincreased DUI patrols over St. Patrick’s Day weekend. Drivers convicted of DUI charges can expect annual car insurance rates to increase 36%. The true cost of a DUI in Washington for a first-time offender is $7,000 to $11,000 — this includes the fine, insurance rate increases, lawyer’s fees and the cost of an ignition interlock system.

The Minnesota State Patrol adds DUI patrols on St. Patrick’s Day and has seen the number of arrest rise every year since 2009 . Last year, Minnesota’s Department of Safety reported that nearly 500 people were arrested statewide on DUI charges over the weekend. Drivers who receive a DUI can expect their insurance rates to go up an average of 30%.

Scranton’s St. Patrick’s Day parade organizers expect about 12,000 participants and over 120,000 spectators. Last year, the Lackawanna Highway Safety Program warned drivers to designate a driver. In addition to paying fines and lawyer’s fees, Scranton-area drivers who are convicted of a DUI can expect a 50% increase in their car insurance premiums.

Of the cities surveyed, Cincinnati drivers face the smallest annual dollar increase if convicted of a DUI, mostly because Cincinnati residents have cheap car insurance compared with other metropolitan areas. The average driver who is convicted of a DUI will pay $376.35 more each year for car insurance. Drivers have a higher chance of being caught because police are out in force: On St. Patrick’s Day 2013, the Ohio State Patrol arrested 142 drivers suspected of driving under the influence.